What we’re going to find out today is makgeolli. Makgeolli is a type of rice wine with a very long history and is made by fermenting yeast and grain. Makgeolli is fresh wine and rough just filtered. 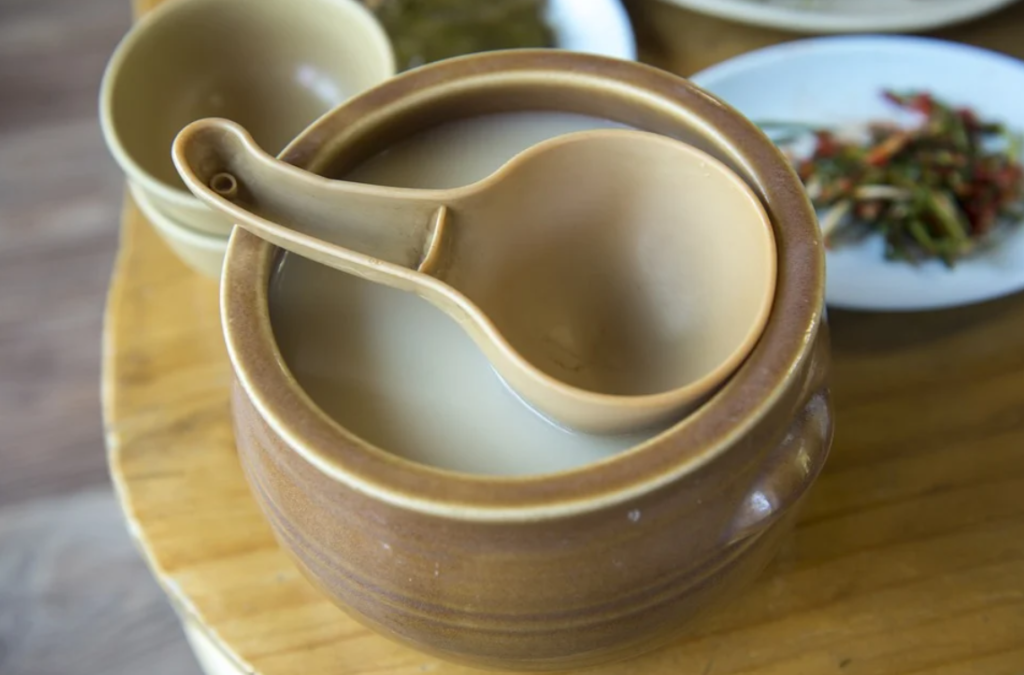 It has a strong unique smell and taste, but its alcohol content is about 4 to 8 degrees Celsius. Then let’s take a look at the characteristics and effects of Korean traditional liquor makgeolli, which has been with ordinary people for a long time. Makgeolli is called well-being liquor because it is rich in dietary fiber and minerals. The second most common ingredient in makgeolli is dietary fiber, which accounts for about 10%.

Another reason makgeolli differentiates itself from other drinks is lactobacillus. A bottle of makgeolli sold on the market contains about 70 billion to 80 billion lactobacillus. These huge amounts of lactobacillus help clean the intestine, bowel movements, and eliminate harmful bacteria that cause inflammation, thereby strengthening immunity.

In addition, although the protein content is not high, it is mostly composed of essential amino acids, so it contains a variety of vitamin B groups that are excellent in quality and have effects such as skin regeneration fatigue recovery. It contains a large amount of lactic acid and citric acid, which help recover from organic acid fatigue that promotes metabolism. Makgeolli also contains ingredients that suppress cancer cells.

According to a university research team, administration of makgeolli concentrate to mice showed the effect of suppressing proliferation of liver cancer breast cancer and cervical cancer cells, and the damaged liver tissue recovered. In addition, according to the analysis of the ingredients of makgeolli, makgeolli has been found to have the effect of inhibiting the production of new blood vessels around cancer and inhibiting cancer metastasis.

Studies have shown that beta-cytosterol contained in rice, the main ingredient of makgeolli, reduces the size of gastric cancer tumors, and panesol, which has anticancer and anti-tumor effects, is mainly located under makgeolli, so it is recommended to shake makgeolli.

In the past, there were many rumors that drinking makgeolli would give you a headache. When making alcohol with rice was banned in the past, makgeolli made of flour or mixed grains appeared, and carbide, an industrial chemical, was added to speed up the fermentation period. These chemicals were the cause of headaches, but makgeolli doesn’t contain any carbide these days, so you can drink it with confidence.

However, even if it is good for your health, excessive alcohol consumption is not good because it is still alcohol after all. The recommended daily intake of makgeolli is about one or two glasses from 300ml to 400ml.